THE MOST SUCCESSFUL COMPANIES IN MONTENEGRO AWARDED 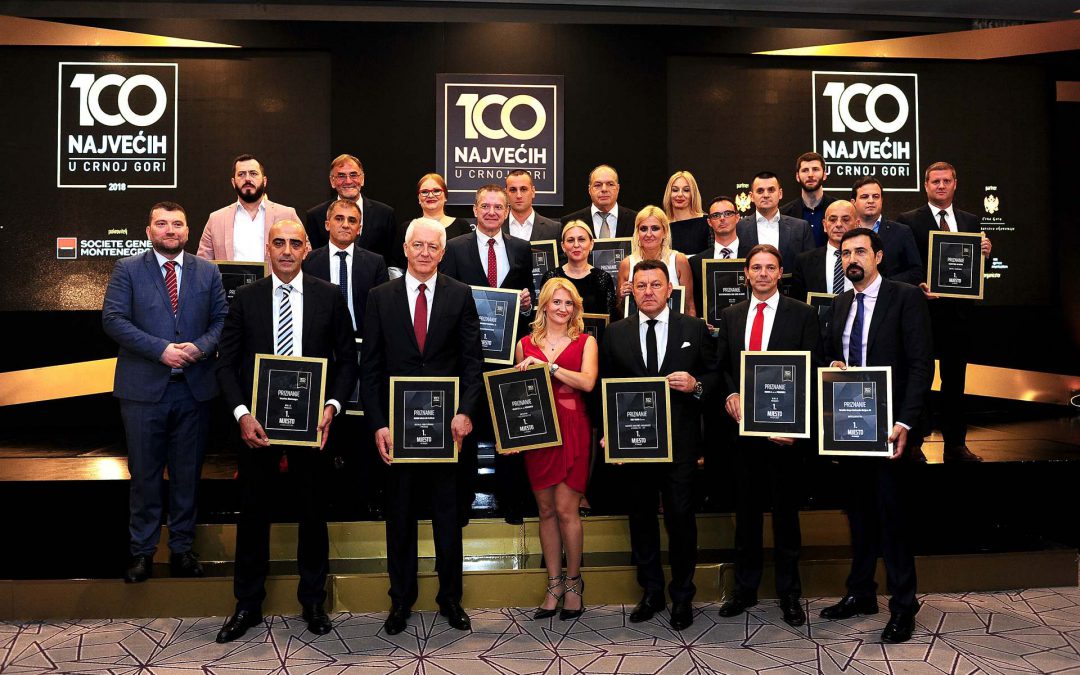 After four months of intensive activities, the “Top 100 in Montenegro” project reached its end with the awards given to the most successful Montenegrin companies in 25 categories and presentation of the publication “Business Newspaper – Top 100 in Montenegro”. Given the circumstances in Montenegro, it represents a unique business, institutional and promotional activity aimed at presenting the largest and most successful domestic companies to the public and promoting responsible business based on relevant and official public data. 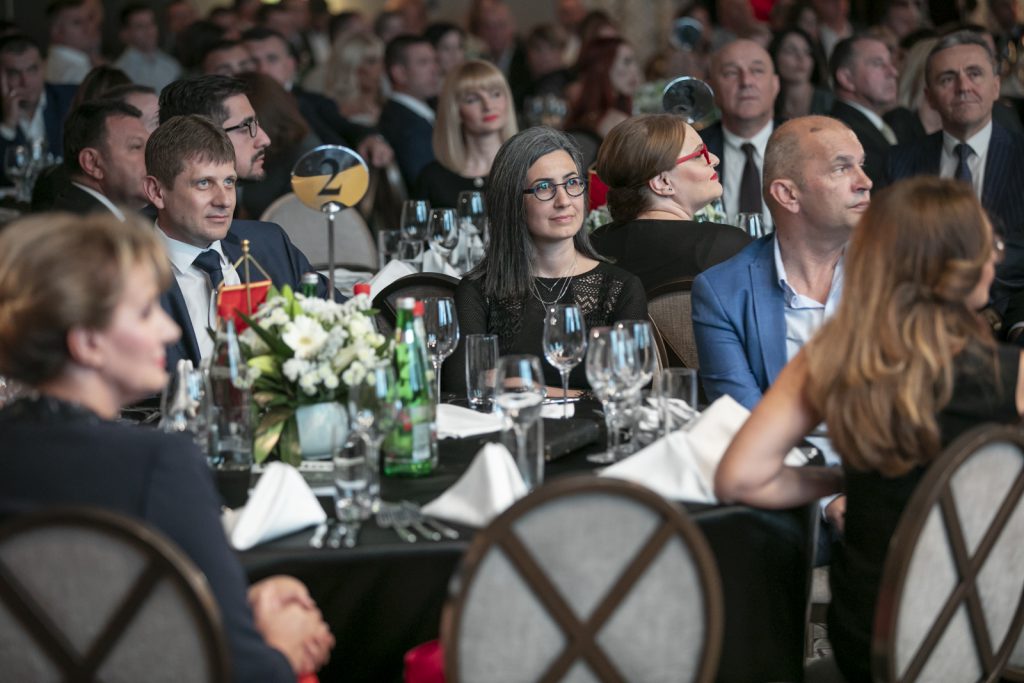 The “Business Newspaper – Top 100 in Montenegro” is the first publication of the kind in Montenegro and a sort of a yearbook of business achievements. It contains comprehensive information on the greatest micro, small, medium-sized and large companies by their revenues, profit and number of employees. The publication provides an analysis of the structure, results, business trends and employment in 12 sectors, as well as lists of the largest companies in each sector. It also includes a list of companies that recorded continued growth of key business indicators in the past 3 years.

At the closing ceremony organised at the Hilton Podgorica Crna Gora Hotel, Mrs. Ljiljana Burzan Nikolić, the project director, has said that “the genuine idea” was never unattainable for her, and that “knowledge, education, will, desire, courage, integrity, people, good people, ideas lead to implementation in the best way.” 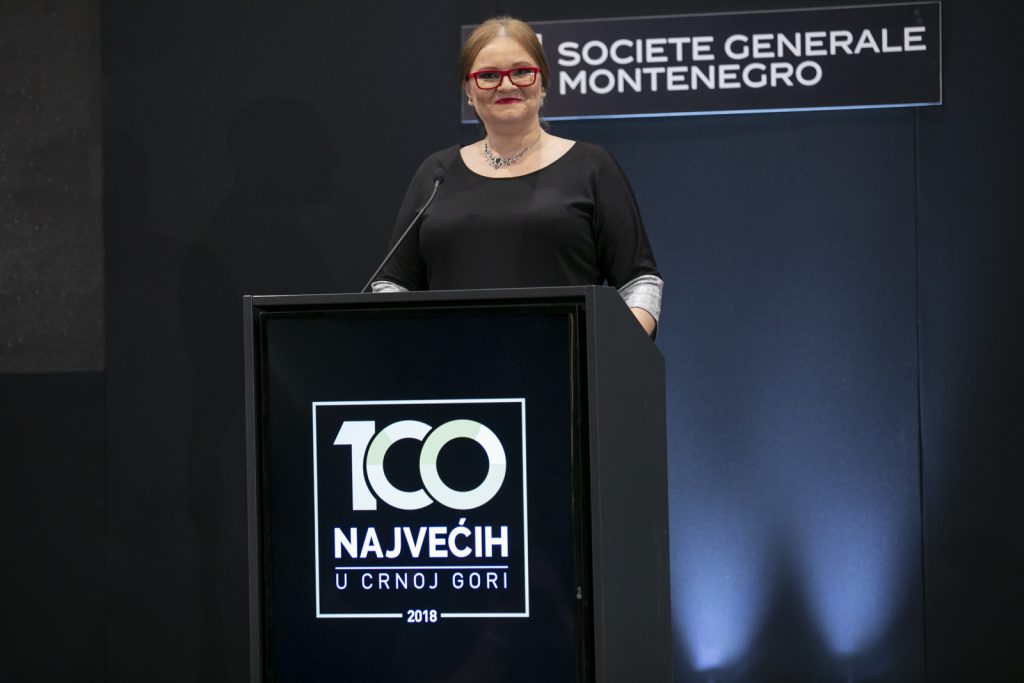 The “Top 100 in Montenegro” is clearly one of those ideas whose time has come. This is also confirmed by the fact that it was recognized and supported both by Montenegrin companies and from the highest state addresses already in its first year. We tried to offer the best, although I honestly believe the best is yet to come in the years ahead,” she has said.

Mrs. Burzan Nikolić has also stated that the Project brings value to all those it has brought together: to companies whose results should be heard, to state institutions whose rules and regulations must be respected, but also to the general public that can prosper only if all actors in business affairs respect the rules and work continuously to improve business conditions, thus sending clear messages that the result achieved through investment in knowledge, quality and work opens the door to those who accept business ethics as one of the key postulates.

Mr. Darko Radunović, the finance minister, has congratulated the organizers on launching the project of “recognizing” the best in Montenegro and added that his Government department strongly supports such initiatives and that they are pleased to be part of the “Top 100 in Montenegro” project. 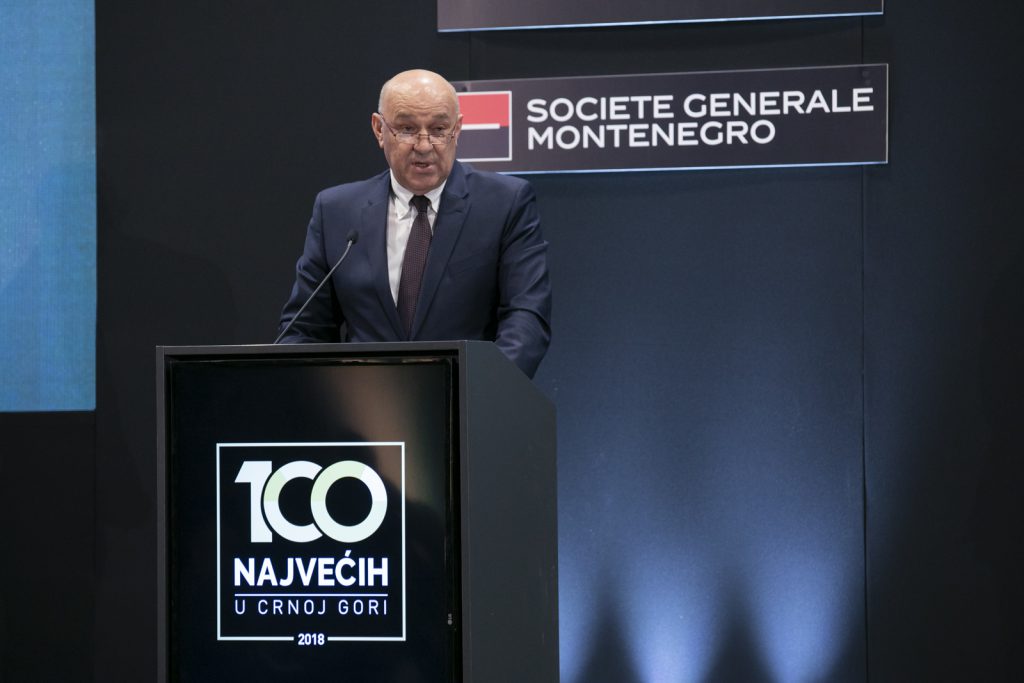 “By supporting this initiative, we are encouraging all business entities to compete for a better result in the market in the coming period, through improvement of the quality of the business models they follow. Our support to the project is a confirmation of the seriousness in the fulfilment of the Government’s obligation to act responsibly and to support the development of successful and socially responsible companies,” the minister has said.

He has added that they are especially pleased with the fact that the up-to-date financial reports were used as a basis for analysis and data acquisition for the project needs. “Such approach also promotes the importance of financial reporting from the perspective of the private sector and the state, as a user of information included in the reports.”

“In addition, we are very pleased with the indicators resulting from the analysis conducted under the Top 100 project. They indicate the significant economic activity of the Montenegrin economy, which is a consequence of its capacity to record good results despite challenging post-crisis times. Today, the question is not whether to build an entrepreneurial society, but how to create a good institutional framework for the purpose of development of entrepreneurship, something that we, as Government representatives, have been continually working on,” minister Radunović has said.

Ms. Dragica Sekulić, minister of economy, has said that the promotion of successful companies and their achievements is a good example of how to make a company competitive and be responsible in doing business, towards employees and the community. 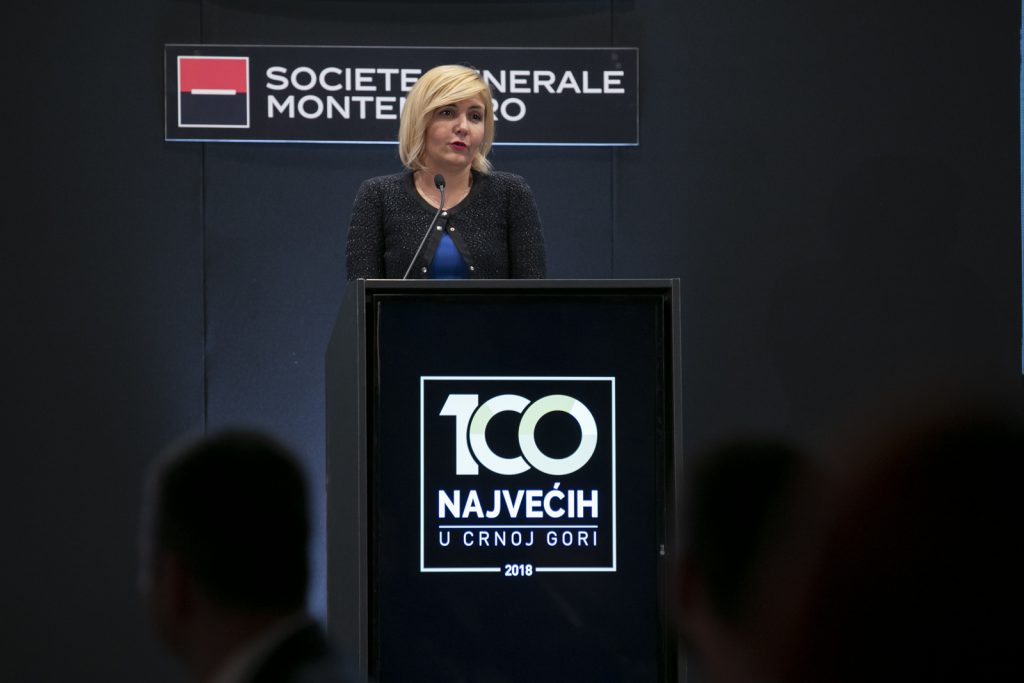 “This is the first year of the implementation of the “Top 100 in Montenegro” project. I sincerely wish the project to continue to live in years to come and I am convinced that this type of project is an additional incentive for domestic businessmen to use the available government assistance to continue to improve their business in the future and thus contribute to their own efforts to find their place among the top 100 in Montenegro”, she has said.

Minister Sekulić believes that the project will show to existing and potential investors that they can find credible business opportunities and partners in Montenegro.

“In addition, it will inspire and encourage start-up projects, especially in the sector of entrepreneurship, micro and small enterprises. I believe that companies that are selected among the top 100 will maintain the continuity of their successful business operation in the coming years, and I congratulate the winners on their awards,” she has said.

Mr. Milorad Katnić, president of the Board of Directors of the Societe Generale Bank Montenegro, has said that he is pleased that the financial institution he comes from was among the first to recognize the importance of this project and that as a sponsor it supported the selection of the largest, most successful and best Montenegrin companies in 2017. 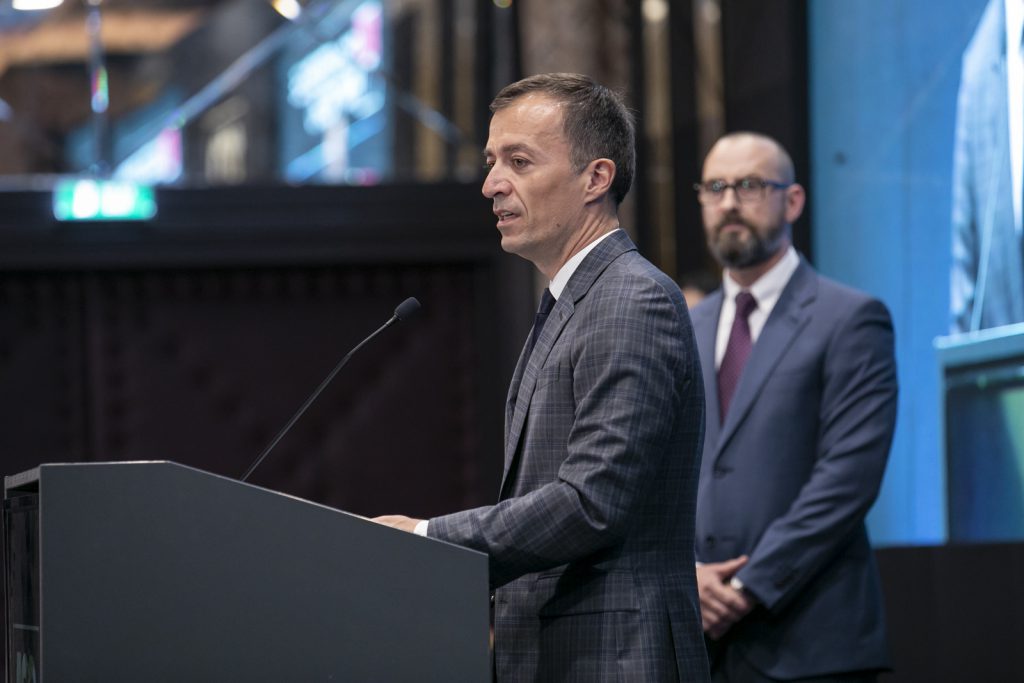 “For us, this is not just a pioneering endeavour to promote the greatest and the best, but above all an example of how a quality idea can be realized and serve the public good. I am saying this because the realization of this idea is based on the use of available data, which are carefully and methodologically systematized and analysed. This is an example that even in Montenegro data and information are becoming increasingly valuable and turning into a key resource,” he has said.

“Many of the Montenegrin companies last year achieved their best results since their establishment. For Societe Generale Bank Montenegro, the previous year was also one of the most successful. We believe that our continued support to Montenegrin companies has contributed to their last year’s successes at least a little. This is also evidenced by the fact that most of the companies that received awards within this year’s selection are long-time clients of our bank,” he has said.

“Top 100 project is sending an important message to the economic community and encourages all of us to perform even better and to give an extra contribution to the development of the Montenegrin economy and society. I would like to congratulate all award winners on the results they achieved, with the wish that the years ahead us are even more successful,” he has said.

The „Top 100 in Montenegro” project was implemented by BI Communication in partnership with the Ministry of Finance and Ministry of Economy. The data and analysis were provided by BI Consulting, the leading Montenegrin provider of creditworthiness data. The Societe Generale Bank Montenegro is the project sponsor, Crnogorski Telekom is the exclusive partner, and Delta City and Hilton Podgorica special partners. Yellow event is event partner, and Montefish, Artemon and Klikovac are partners.

The reservation of the publication “Business newspaper – Top 100 in Montenegro” can be made via the official project site: www.100najvecih.me.

So, let’s talk about successes! 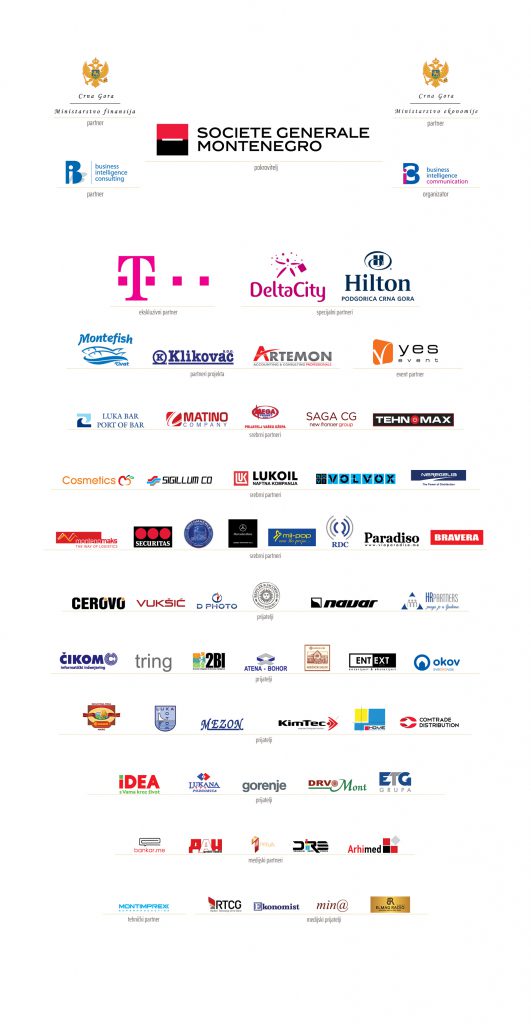