BUSINESS RESULTS IN 2017 BETTER THAN IN THE PREVIOUS YEAR 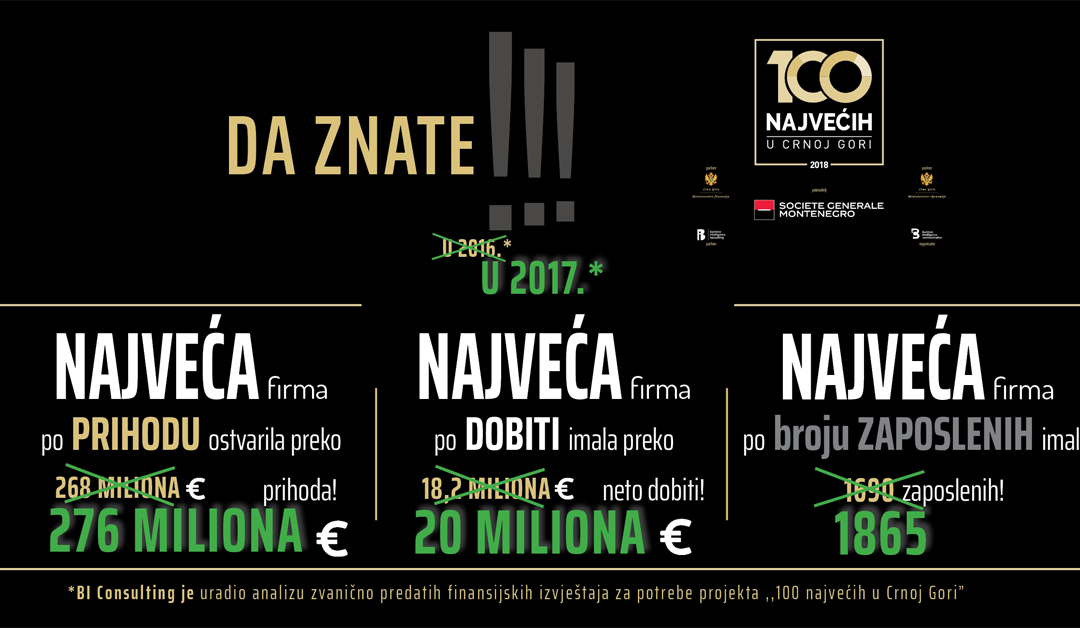 The third month of the campaign within the “Top 100 in Montenegro” project is passing in the atmosphere of identification of positive business practices and business environment. A panel “How to encourage local products and services and avoid violation of the assumed international obligations” was organised In the Montenegrin Chamber of Economy and the panellists included Mr Nemanja Katnić, M.E., state secretary at the Ministry of Finance of Montenegro, Mr Radosav Baćko Babić, M.E., director general of the Directorate for Investments, Development of Small and Medium-sized Enterprises and Management of EU Funds at the Ministry of Economy, Ms Nina Drakić, head of the Research and Analysis Department of the Montenegrin Chamber of Economy, and Mr Milutin Đuranović, M.E., co-owner of the “Lazine” dairy. The panel was hosted by Mr Ratko Nikolić, founder of BI Consulting, provider of credit rating information. The panel discussed the competitiveness of domestic companies and their positioning in relation to regional and global corporations, support measures and incentives, plans in that area, actions organized by national associations, but also the experiences of domestic producers and their vision of the market.

Given that the deadline for submitting balance sheets expired, BI Consulting has provided preliminary results of last year’s business operations of Montenegrin companies, showing that 2017 was more successful than 2016. In anticipation of the final results, we are already able to share some of the results: in 2017, the largest revenue-generating company had € 276.1 million of revenues, or about eight million euros more than in 2016. The largest company by net profit in 2017 earned 20.9 million euros in net profit, while in 2016 it amounted to 18.2 million. The largest company by number of employees had 1,690 employees in 2016, and in 2017 this number was higher for 175 and totalled 1,865 employees.

The “Top 100 in Montenegro” project includes a four-month campaign which is based on enhancing the culture of regular financial reporting, which is directly related to the ranking of companies within the project, to be published in the special edition of “Business Newspaper – Top 100 in Montenegro 2018”. The project will be completed by awarding prizes to winners in all categories at the ceremony to be held on May 30 at Hilton Podgorica hotel.