AWARDS FOR THE BEST BUSINESSES IN MONTENEGRO Socially and economically responsible, but primarily transparent business operation contributes to the development of the Montenegrin society and the economy, and recognizing and promoting good business examples is important in order to inspire others.

Mrs. Ljiljana Burzan Nikolić, manager of the Top 100 in Montenegro project, said that it was important to record the growth of economy performance indicators, which was achieved, as she added, “with the synergetic effect of committed actions of the system institutions and businesses”.

“We are proud that we have also become a strong link that both business entities and institutions of the system can rely on. I will again highlight the publicly available and clear criteria that we used as guidance to rank the most successful Montenegrin companies, because it is important to remain objective and maintain the highest level of professionalism, as it is important to show respect for the best ones, which they really earned with their work”, Burzan Nikolić said.

She added that it was a pleasure to present the second edition of the exclusive publication Business Newspapers – Top 100 in Montenegro.

“Our goal, just like yours, is to get better, to provide more, to offer additional quality and content, and to grow shoulder to shoulder with your successes, to present the business environment of our country in as good manner as possible, but also to enhance its essence. Enjoy reading the Business Newspapers – top 100 in Montenegro, and discover a handful of useful information and recommendations that will guide you to generate new business ideas,” Burzan Nikolić said. Mr. Nemanja Katnić, state secretary at the Ministry of Finance, pointed out that, in 2017 and 2018, the Montenegrin economy achieved dynamic and strong economic growth, with rates above the expectations.

“The final data show that the real GDP grew at the rate of 4.7% in 2017, while according to preliminary data, in 2018 it grew by 4.9%, which is the highest growth rate recorded since the global economic crisis in 2009”, Katnić explained.

He said that more than 18 thousand new jobs were created in Montenegro over the past two years, and according to the last year’s Labour Force Survey, the unemployment rate stood at 15.2%, which is the lowest level since the Montenegro regained its state independence.

Katnić recalled that the new Law on Administrative Fees and the new Law on Local Communal Fees were adopted, which allowed reduction of those fees to the greatest extent possible.

“The expected outcomes of these measures indicate lower operating costs, especially for micro, small and medium-sized enterprises, through lower fees and fewer procedures. This will result in additional available revenues for spending and savings, and will have an indirect positive impact on the economic growth,” Katnić explained.

He also said that the Government of Montenegro was continuously implementing concrete measures aimed at further reduction of tax burdens, and recalled that contributions to salaries paid by employers would be reduced by 2% starting from July 1st.

“All of the above mentioned clearly indicates that the Government of Montenegro is a reliable partner to business people, which is the only precondition for creation of a favourable and predictable business environment through joint efforts,” Mr. Katnić said. 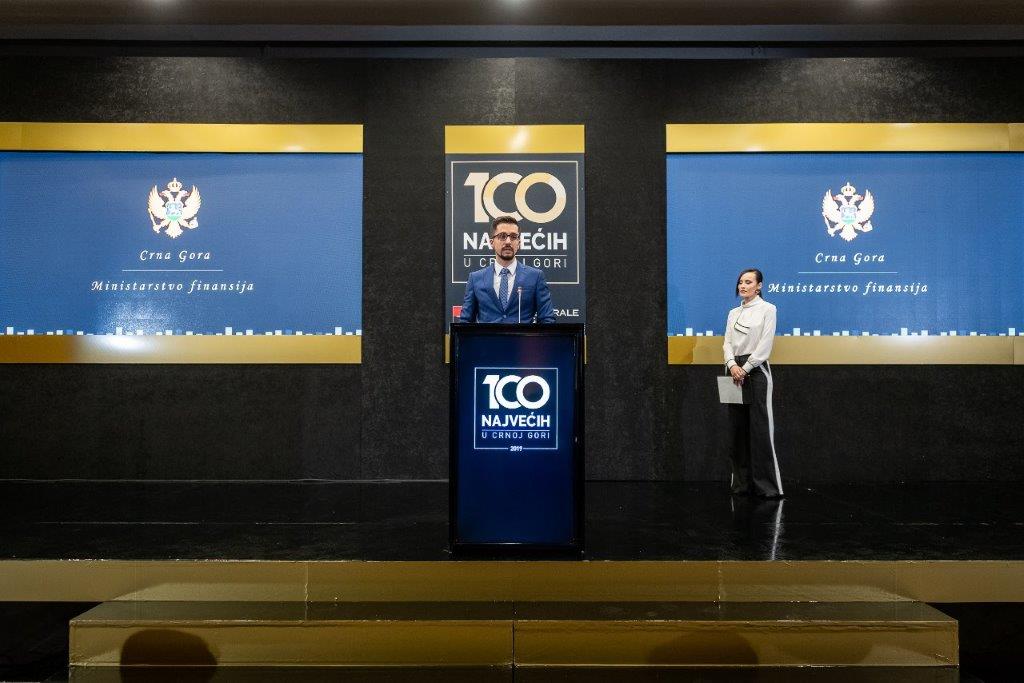 Mr. Radosav Babić, director general of the Directorate for Investments, Development of Small and Medium Enterprises and Management of EU Funds at the Ministry of Economy, said that Montenegro had successful companies, whose products and services were recognized not only in the domestic, but also in the regional and international markets.

“The Ministry of Economy is strategically committed to support domestic businesses and create a stable business environment. The economic policy is aimed at improving the business environment, in order to boost further growth and development of the private sector, as evidenced by numerous indicators of the increase in the number of SMEs and gross foreign investments, as well as by numerous projects that we are implementing with domestic and foreign partners,” Babić said.

He said that, this year, the Ministry of Economy designed the Programme for improving the competitiveness of the economy, and allocated grants, which were awarded through subsidies for new employment, implementation of innovative activities, introduction of international standards in business operations, cluster association, advisory support and encouragement of direct investments.

“The Ministry of Economy will continue to provide full support to all business organisations in the future, both to companies ranked among the top 100 and to companies that aspire to be on the list of the most successful companies in Montenegro,” Babić concluded. Milorad Katnić, chairman of the Board of Directors of the Societe Generale Bank Montenegro, said that the number of registered companies that submitted their financial reports last year increased by 10.5% compared to 2017.

“The number of companies that generated a net profit of more than 100 thousand euros (12%) has increased significantly. The number of companies employing more than 50 employees has also increased significantly (8.1%). I am emphasizing this because I believe that it is important that we have even more big and good teams. Because in business, teams, and not individuals, are key to success,” Katnić said.

He said he believed that the success would not be complete unless it was shared with the team, employees, and the environment in which the business operated.

“Success has this rare feature that it increases when shared. In addition to sales and profit data, success primarily implies good projects and good deeds that remain. And recognizing and promoting good examples is an important project. To encourage others, among other things. I would like to thank the organizers of this event for bringing us together and celebrating the success the second year in a row,” Katnić said.

He said that the Societe Generale Bank Montenegro was proud to be part of the success of many Montenegrin companies by providing banking services and that many of its clients achieved the best results in their history last year.

“Last year was also very successful for the Societe Generale Bank Montenegro, commercially and financially the best year in its history. I would like to congratulate all the companies and I wish them to be even more successful this year, and not when compared to their competition, but instead when compared to their own results from the previous year. And to continue to grow, to design and implement good projects, to promote and share success,” Katnić said. Ms. Dina Cibulskaja, Crnogorski Telekom CEO, said that the project “Top 100 ” sent a strong message to the business community of Montenegro that socially and economically responsible, but primarily transparent business operation contributed to the development of the Montenegrin society and economy “while occasions like this one to connect and exchange experiences can make us even more successful. ”

She said that Telekom was fully committed not only to connecting users with each other but, as she added, connecting them with the possibilities of the digital world, and as a member of the Deutsche Telekom Group, it was a part of one of the most successful technological corporations in Europe.

“Telekom is currently the leader in the field of innovation, when it comes to smart solutions and digitization of Montenegro, which we are fully committed to, and we want to be a reliable partner to both the public and the business sector in Montenegro. We will continue to develop smart solutions and promote the so-called “green economy” and sustainable development of Montenegro, in order to show that we appreciate the decision of business users who put Telekom in the first place,” Cibulskaja pointed out. Presenting the award for largest growing company to Dragan Bokan, the chairman of Voli Trade LLC,

Mr. Darko Perović, director of Securitas Montenegro, was very proud that his company won the award for the second consecutive time, and stated that this was the success of all employees, not just one person. Mr. Saša Lučić, Halo taksi CEO, said that the award was an additional incentive to do even better in the current year in order to reach top 100 again. 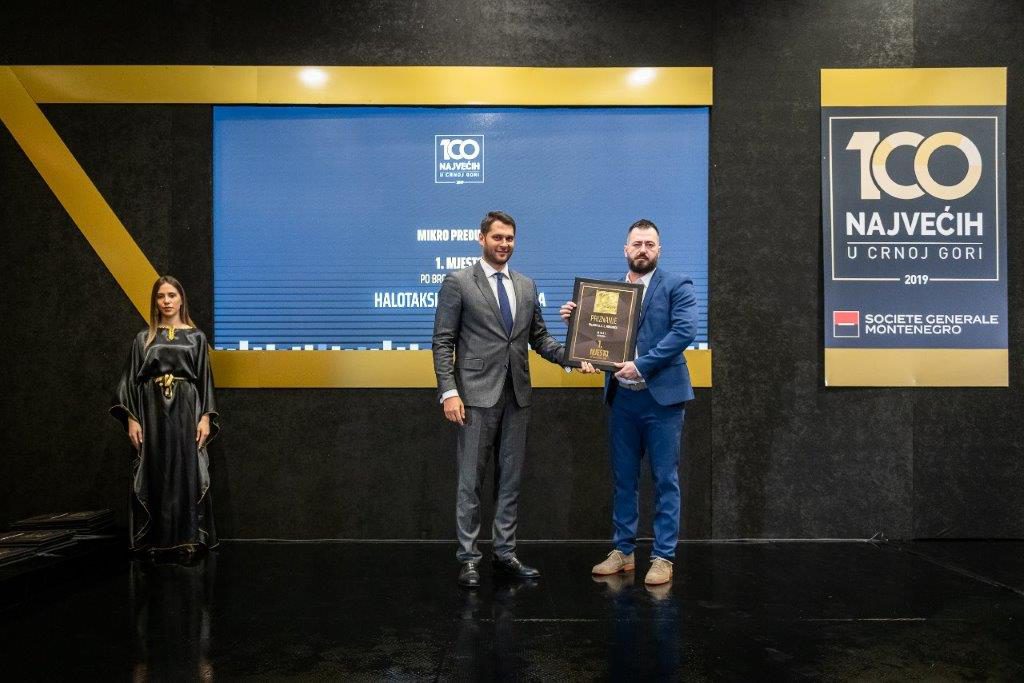 Ms. Gordana Rajović, Institute Dr. Simo Milošević CEO, recalled that this healthcare institution received the revenues award for the second year in a row, that it was an award for hard work and that last year’s turnover was worth more than 11.5 million euros, the biggest in the past ten years.

Dražen Raičković, Finance Plus CEO, said that the prize was the success of the entire company and that the goal is “to grow even more and to see you again at this place.” 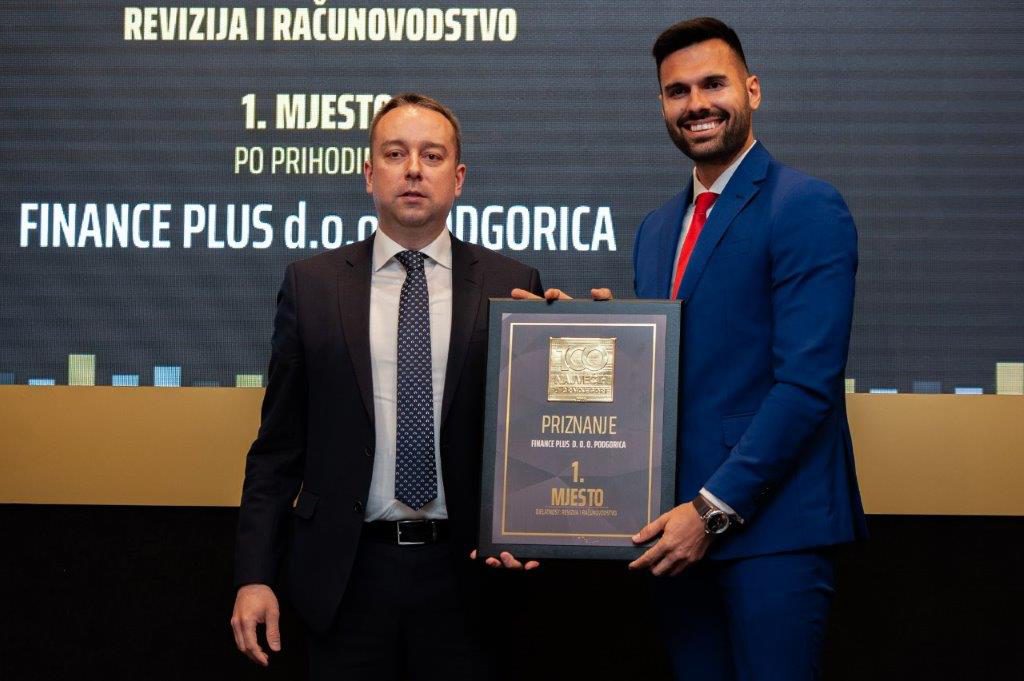 Ms. Olivera Šuškavčević, marketing director of Voli Trade, said that the company was celebrating 24 years since it was established and that “this was the most beautiful way to celebrate its birthday.”

“We are very pleased with the way in which the event was organized. The award methodology is very transparent and thus we, the winners, are even more proud to be on the stage tonight. It’s nice to be the best, it’s nice to be among the successful ones, and it is a privilege to be part of the top 100 event,” Šuškavčević said. Mr. Vjekoslav Ivandija, INA-Montenegro CEO, said that the company had one gas station at the beginning of the last year, and today it had 11.

“This award means a lot to us. We are achieving excellent results, we feel good in Montenegro. People positively perceive our brand and fuel quality,” Ivandija said. Mr. Nikola Tadić, representative of Mesopromet from Bijelo Polje, said that the company “worked hard to expand its business, and now that it wants to go into depth, in the sense to turn to our employees, the quality of goods, and the market needs”. Ms. Jelena Kaluđerović, PR manager of the Hotel Group Budvanska rivijera, said that the award was a testament to the efforts that the company had invested for years.

“Last year was a record one or us. We generated EUR 21.6 million in revenues, of which EUR 2.6 million was profit. These are impressive figures and an additional incentive to push forward,” Kaluđerović explained. 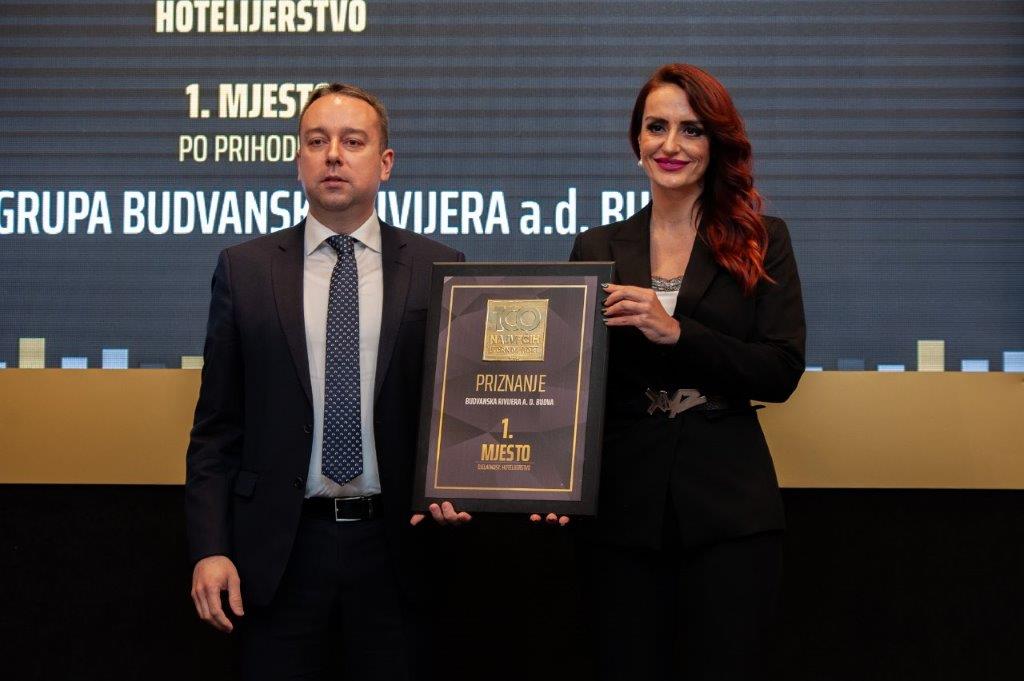 CRNOGORSKI TELEKOM is the leader in the telecommunications sector, VOLI TRADE in the trade sector, BUDVANSKA RIVIJERA in hotel management, DELTA M CG in real estate management, FINANCE PLUS in auditing and accounting, BEMAX in the construction sector, and MESOPROMET in the sector of food and beverages.

Coal mine RUDNIK UGLJA is the leader in the sector of other production and processing, COMTRADE DISTRIBUTION in the IT sector, JUGOPETROL in the oil and derivatives sector, GLOSARIJ in pharmacy, INSTITUT DR SIMO MILOSEVIC in medical services, and VOLI TRADE won the award for the biggest growing company.

The project for improvement and promotion of the Montenegrin economy “Top 100 in Montenegro” was initiated by the company BI Consulting in partnership with the Ministry of Finance and the Ministry of Economy, with the support of the Chamber of Economy of Montenegro and general sponsorship of the Societe Generale Bank Montenegro.